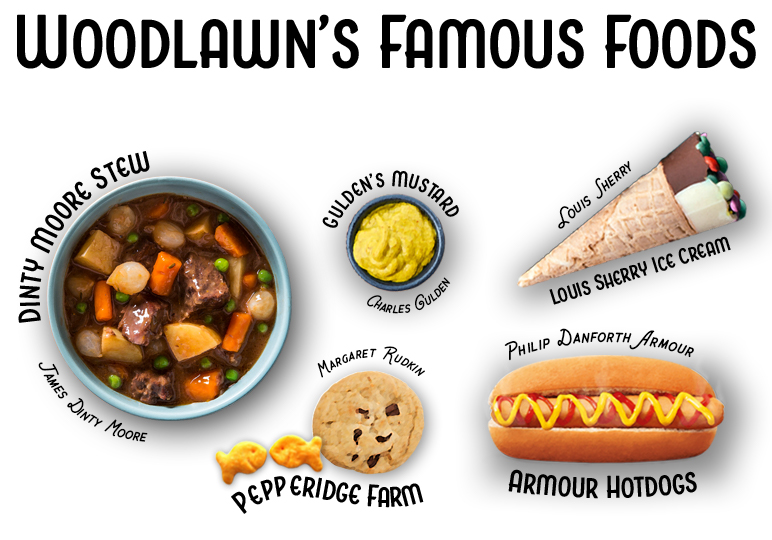 In August, New Yorkers will be taking advantage of Restaurant Week, a delicious way to prepare for our upcoming Fabulous Foodie Trolley Tour.  Our research volunteers enjoy identifying interesting sites for thematic tours, and the roster of those who owned restaurants, made fortunes off food products, and provided drinks to wash things down has grown to where it is impossible to see all the sites on foot.

The research team started their search by “reading” Appetite City: A Culinary History of New York, by William Grimes.  What our curious volunteers did was to compare the restaurant owners against our interment records to see who might be buried at Woodlawn.  Many memorable names came from this search including: Louis Sherry (1855-1926), August Luchow (1856-1923), Alice Foote MacDougall (1867-1945) (The Little Coffee Shop), James “Dinty” Moore (1869-1952) and Charles Delmonico (1861-1901).

Another resource we used was Food City:  Four Centuries of Food-Making in New York, by Joy Santlofer.  This book provides fascinating information about the manufacturing of food in New York City.  If you want to know all about crackers during the Civil War, it’s the book for you!  It does feature some of the brewers at Woodlawn:  Schaefer, Schmid, and Ehret to name a few.  Woodlawn also has several sugar baron families in our care including Havemeyer, Rionda and Matthiessen. When you think soft drinks, don’t forget Bronx Borough President Henry Bruckner  made his living by selling soda water.  Tea and coffee merchants are buried in the older sections of the cemetery near the Webster Avenue Entrance:  William Booth and James Edgar, two of Woodlawn’s founding fathers who were partners in this trade.  The familiar food suppliers Armour (ham and hotdogs), Gulden (mustard), Lowe (Popsicles) and Rafetto (mint jelly) are in private mausoleums.  In one of the older hillside tombs you’ll find Margaret Rudkin (1897-1967), whose baking skills established the Pepperidge Farm Company.

Our volunteers are now stirring it up, looking for those who wrote cookbooks. Charles Ranhofer (1836-1899), the man credited with revolutionizing dining in the city, published the 1000 page Epicurean in 1893.  This classic cookbook revealed the secrets of gourmet cooking and turned New York into a town for fine dining.  Ranhofer was the chef at Delmonico’s.  Herbert M. Kinsley, owner of the Holland House Hotels, was the author of One Hundred Recipes for the Chafing Dish – a must have for those who have antique cookware in the back of their cupboards!

Another classic that belongs in everyone’s collection is The Century Cookbook by Mary Ronald.  Ronald was the pen name of Augusta Foote Arnold (1844-1903) who also wrote Luncheon’s a Good Picture Book, and The Sea-Beach at Ebb-Tide.  She is buried in the Arnold family lot on Chapel Hill Plot.  Her father in law, Benjamin Arnold (1812-1894), the “first coffee king,” was a founder of the Coffee Exchange in the City of New York.

One of our researchers is spending time at the Municipal Archives searching through decades of death certificates (the old ones are kept at 31 Chambers Street) looking for interesting occupations.  Waiters, chefs, busboys and bartenders are found and their occupations verified by obtaining their obituaries.  George Von Behr, the longtime Captain of Luchow’s waiters, is buried at Woodlawn as well as grocer Charles Gristede (1871-1948).

Our volunteers will not stop looking for food and beverage connections until the Trolley rolls on August 26th.  We hope you’ll join us as we remember the days when you sat down to enjoy a meal and you didn’t place your dinner order using an electronic device. sites for