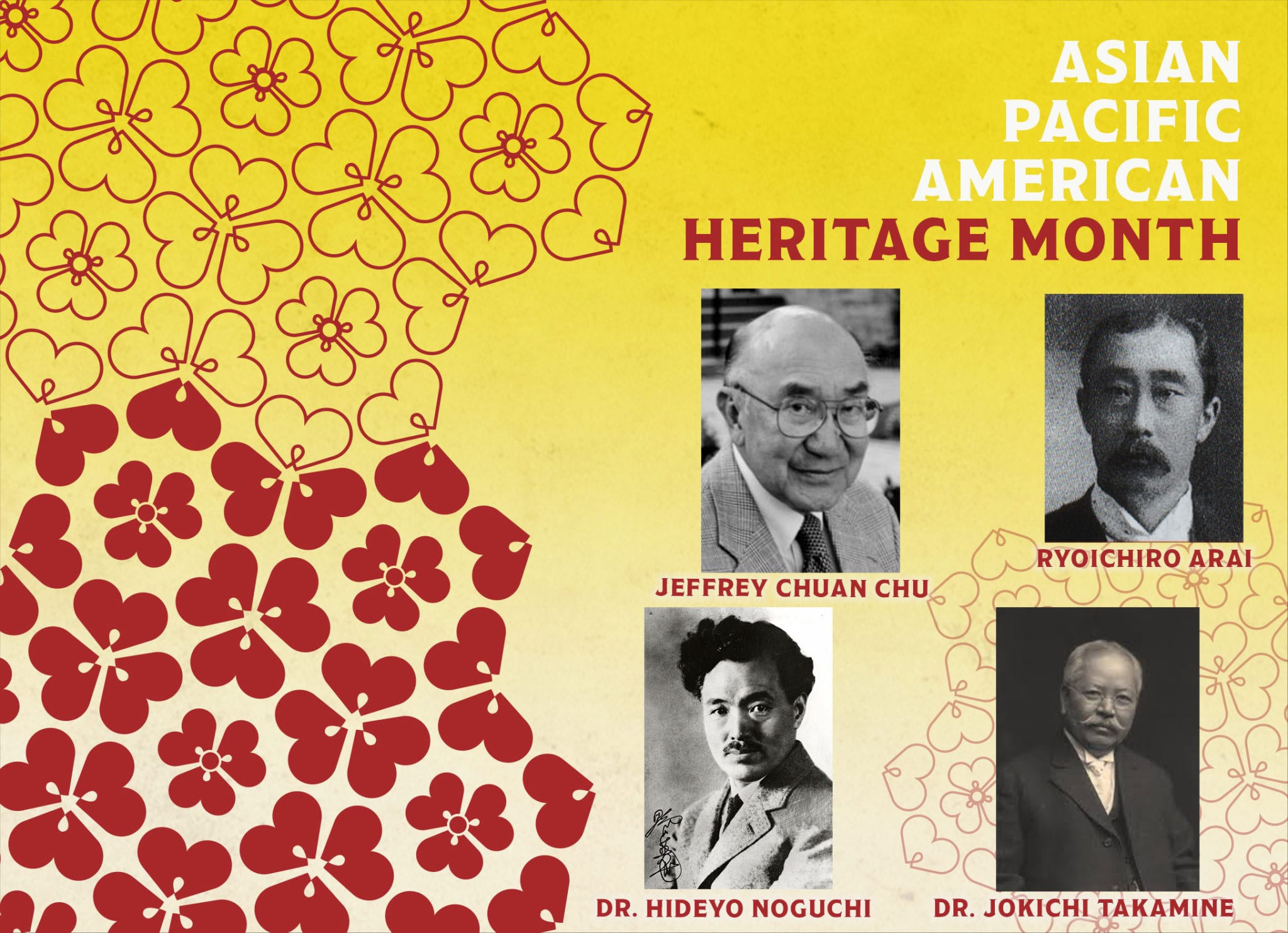 During the month of May at Woodlawn Cemetery, we celebrate the culture, traditions, and the history of Asian Americans and Pacific Islanders in the United States. Japanese and Chinese immigrants settled in Hawaii, California, and Oregon as early as the 1850s. The transcontinental railroad was completed in 1869 – a marvel of engineering built primarily through the hard work of Chinese Immigrants.

An early Chinese immigrant memorialized at Woodlawn is cook and cabin steward Ah Sam (1853-1882), who traveled on the ill-fated voyage of the Jeanette with Commander George Washington DeLong. After the remains of the crew were found in Siberia, they were brought to New York to Woodlawn and laid to rest in 1884.

Sorakichi Matsuda (1859-1891) was born in Japan and was trained as a Sumo wrestler. In 1883, he came to America to wrestle in all the major cities. He was a fierce competitor, who drew large crowds, performing in prominent venues. Matsuda was so famous his image was featured on a trading card which is among the artifacts in the collection of the Metropolitan Museum of Art. View the card here: http://www.metmuseum.org/art/collection/search/410182

The head of the Arai family, Ryoichiro Arai (1855-1939), was among the leaders in the effort to introduce Japanese Culture to the people of New York. He was a founder of the Japan Society and made his fortune in the production of silk. His son, Yoneo Arai (1889-1980), President and Chairman of the Yamaichi Securities Company, was also involved in cultural exchange between Japan and the United States. He served as Vice President of the Japan Society of New York. During World War II, he taught Japanese to Army students at Yale and was a member of Harvard’s committee for the Department of Far Eastern Studies.

Dr. Jokichi Takamine (1854-1922) was a Japanese chemist credited with founding the Nippon Club, located at 161 West 93rd Street in Manhattan. He is entombed in a mausoleum with a beautiful stained-glass window depicting Mount Fuji. In 1901, Dr. Takamine isolated and purified adrenaline, a major breakthrough for those suffering from asthma. He was also among those who generously donated the beautiful cherry blossom trees that surround the tidal basin in Washington, D.C. Each year, thousands of visitors go to the nation’s capital to see the delicate pink flowers.

At the end of the month, representatives of the Japanese Medical Society of America and the Hideyo Noguchi Foundation gather at Woodlawn to remember the legacy of Dr. Hideyo Noguchi (1876-1928), a dedicated bacteriologist who “through his devotion to science he lived and died for humanity.” Brought to America from Inawashiro, Fukushima, to work as a research assistant, the young scientist took a research position with the Rockefeller Institute of Medical Research. Tragically, he succumbed to yellow fever while working to find ways to prevent the spread of the virus. Considered a hero in Japan, Noguchi’s image is on the 1000 note Yen.

Another prominent figure noted for his discoveries is Jeffrey Chuan Chu (1919-2011), a pioneering computer engineer. Born in Tianjin, China, Chu studied at the University of Pennsylvania where his interest in computer science led him into a career as part of the team that designed the first electronic computer. In 1981, he received the first Computer Pioneer Award from the IEEE Computer Society. In addition to his contributions to the world of computers, Chu was known as a “passionate crusader for U.S.-China cultural exchange.”

Sokei-an Sasaki (born Yeita Sasaki, 1882-1945) was influential in the growth of Zen Buddhism in the U.S. From Japan, Sokei-an was one of the first Japanese Rinzai masters to live and teach in America and founded the Buddhist Society of America, now called the First Zen Institute of America, located in Manhattan on East 30th Street.

When you walk the grounds of the Woodlawn Cemetery, you will come across a pair of “Foo Dogs,” Chinese guardian lions set in front of the Yung family mausoleum to protect the memory of those at rest. These traditional lanterns made of stone serve as memorials for the Japanese and Korean families honoring their cultural heritage. Chrysanthemums, the imperial seal of Japan, are incorporated into several monuments and bronze plaques.

For over 150 years, The Woodlawn Cemetery has served all New Yorkers, embracing a diversity of cultures while providing a beautiful landscape to showcase the collection of memorials that celebrate the heritage of over 90,000 lot owners. We encourage you to plan a visit to Woodlawn to see the beauty and experience the fascinating history for yourself.