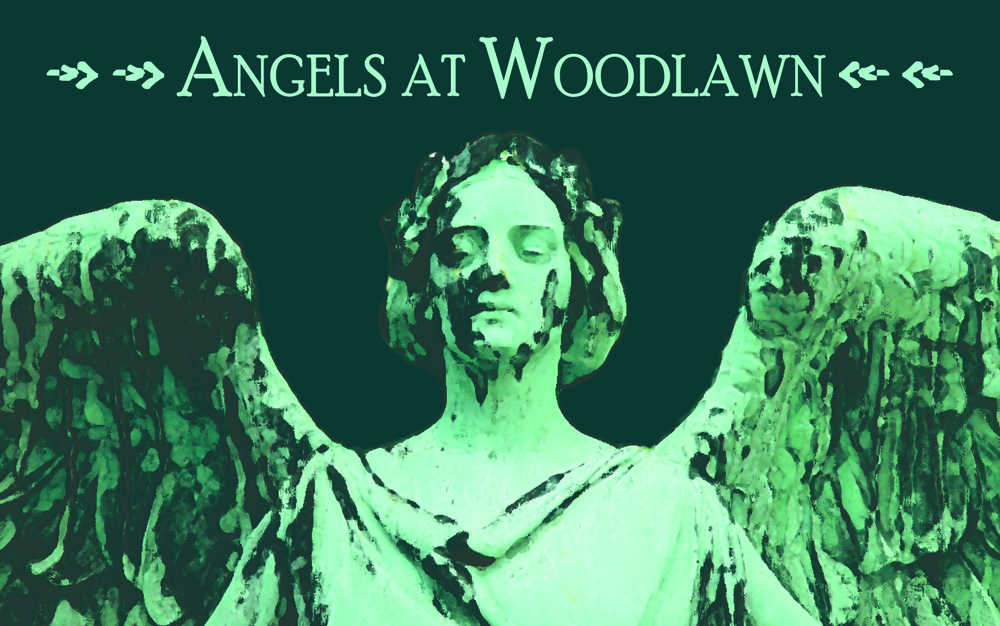 Cemeteries are filled with angels, watching over those at rest, transporting souls with outstretched wings and giving us hope for eternity. Hundreds of angels grace the grounds of The Woodlawn Cemetery – some inspired by classic works of arts and others original creations by accomplished artists.

Many of Woodlawn’s beautiful and delicate marble angel figures were carved in Italy, created by talented carvers and transported across the sea by late 19th century monument dealers. By the end of the 19th century, several accomplished sculptors immigrated to New York City where they set up shops outside the cemetery gates, providing angels of all sizes for Woodlawn’s lot owners.

The Gerould Angel on Fern Plot, is similar to the “Monteverde Angel,” a well-known work of art created by Giulio Monteverde (1837-1917).  Also known as “The Angel of the Resurrection,” the original sculpture was carved in 1882 and is a memorial in the Staglieno Cemetery in Genoa, Italy.  Copies of the statue appear in cemeteries in Rome and cemeteries across the United States. 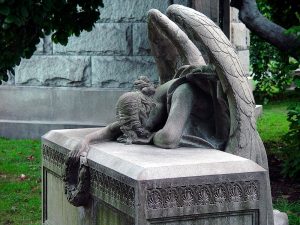 Another monument resembling a famous work of art is the Bode Angel located in the Althea Plot.  Inspired by the William Wetmore Story 1819–1895, the “Angel of Grief” is draped over the gravestone with her head down, resting on her arm.  Across the country families in mourning commissioned similar statues carved in marble or granite like the one found at Woodlawn. 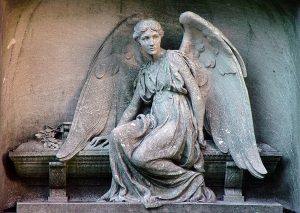 One of the most beautiful, original works of art located at Woodlawn is the Kinsley Angel, by Daniel Chester French (1850-1931). French is best known for creating the Lincoln Memorial. Although the original model was designed by French, he commissioned the Piccirilli Brothers to make the large scale work for the cemetery. Many of Woodlawn’s sculptures were created by Piccirilli Studios, which was located at 142 and Willis in the Bronx and employed as many as 100 carvers. Piccirilli Studios created the memorial to Mayor LaGuardia’s first wife and child, the Bliss Memorial and the “Outcast” and “Fortitude” which mark the lots owned by the famous craftsmen who are buried at Woodlawn.

One of the most popular winged images found inside Woodlawn’s mausoleums is the “Guardian Angel.”  For centuries, this image of a comforting angel guiding children has appeared in paintings, tapestries and carvings and a beautiful replica is located inside the community mausoleum.

In addition to beautiful angel sculptures, resurrection angels, guardians of Christ’s tomb and arch angels were designed in glass to decorate family mausoleums.  Tiffany, LaFarge and Maitland Armstrong, some of the most respected glass artisans made colorful windows for their Woodlawn clients. 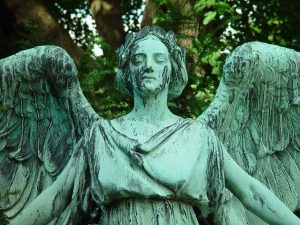 Though angels are symbols of peace and hope, one particular angel at Woodlawn was a source of conflict. In 1918, Minnie Knowlton Young took another lot owner to court for replicating her bronze angel. The figure is close to six feet in height, with outstretched wings. In her hands, the angel holds a wreath of laurel representing victory and a wreath of oak, symbolizing strength. Although the Young angel was copyrighted by the monument company and sculptor, it inspired similar versions. Mrs. Young wanted to have the only one of its kind and so she sued Alice Long, asking the judge to make her destroy the sculpture with a sledge hammer. A curator from the Metropolitan Museum of Art took the stand in Long’s defense and declared “there was no such thing as an original angel!” Both angels are still standing on the Pine and Dogwood Plots.

Summer is a perfect time to stroll through Woodlawn’s grounds and see the angels soaring towards the clouds, watching over souls and raising their trumpets toward the sky.