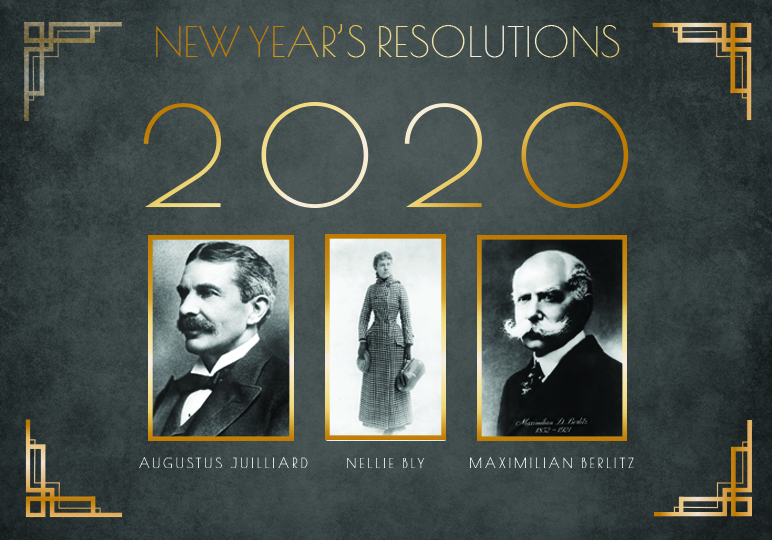 As the ball drops in Times Square, people all over the world ring in the New Year with anticipation and the desire to start fresh through New Year’s resolutions. Whether a person desires to improve in a certain area, attain a goal, or positively influence the lives of others, many self-improvement role models are remembered at Woodlawn.

The most common resolution people make is to lose weight and get in shape. Many have followed the work of Bernarr Macfadden (1868-1955), the “Father of Physical Culture,” to reach their New Year’s goals.  Macfadden is considered the founder of the health and fitness movement in America.  Macfadden worked as a publisher, producing tabloids and popular magazines such as True Detective and Photoplay.  He was a “sickly child,” who began working out, walking for miles, and adopting a vegetarian lifestyle to improve his health.  Macfadden became a proponent of fasting and healthy eating, eventually opening restaurants that encouraged diners to eat beans, vegetables, and to stay away from bread which he called the “staff of death.”

On January 1, many people decide to expand their educational horizons by learning another language.  Maximilian Berlitz (1852-1921), founder of the Berlitz Language Schools, is memorialized at Woodlawn as is Rafael Diez de la Cortina (1859-1939), founder of the Cortina Institute of Languages.  Berlitz issued several publications to assist in language learning, many which are still in print for use today. Cortina was an innovator in the field, known for the first recorded language training courses and the production of guides to learn languages at home.

Travel is a resolution that is easy to keep, if you have the time and financial resources.  Woodlawn’s best known travelers are reporters Nellie Bly (1864-1922) and Elizabeth Bisland (1861-1929) who raced around the world for “eighty days,” ending their challenge in 1890.  Their goal, first announced by Bly, a star reporter for The World, was to beat the record for traveling around the globe. Bisland was sent on the journey by The Cosmopolitan, completing the journey in 76 days.  Bly won the contest, circling the globe in 72 days. Both women wrote articles about their journeys which were read by the public daily in these publications.

Taking care of their estates is one of the commitments people make when they start out the year.  Woodlawn has been involved in many situations where final wishes were not fulfilled and families were thrust into stressful situations.  When Augustus Juilliard (1836-1919), benefactor of the School of Music, passed away, he left it to his attorneys to see that a mausoleum was constructed at Woodlawn.  Many of Woodlawn’s most visited sites, including those of the graves of Miles Davis, F.W. Woolworth, and Joseph Pulitzer, were constructed by wives, children and friends. A lack of final planning leaves those left behind with the stress of (determining and) carrying out final arrangements and tributes. January is a good month to update your paperwork and make sure your plans are complete. Please contact our office and set up a time to review your final plans. Have a happy and healthy 2019, filled with travel, expanded knowledge, and goals that will enable you and your family to enjoy many more New Year’s celebrations.