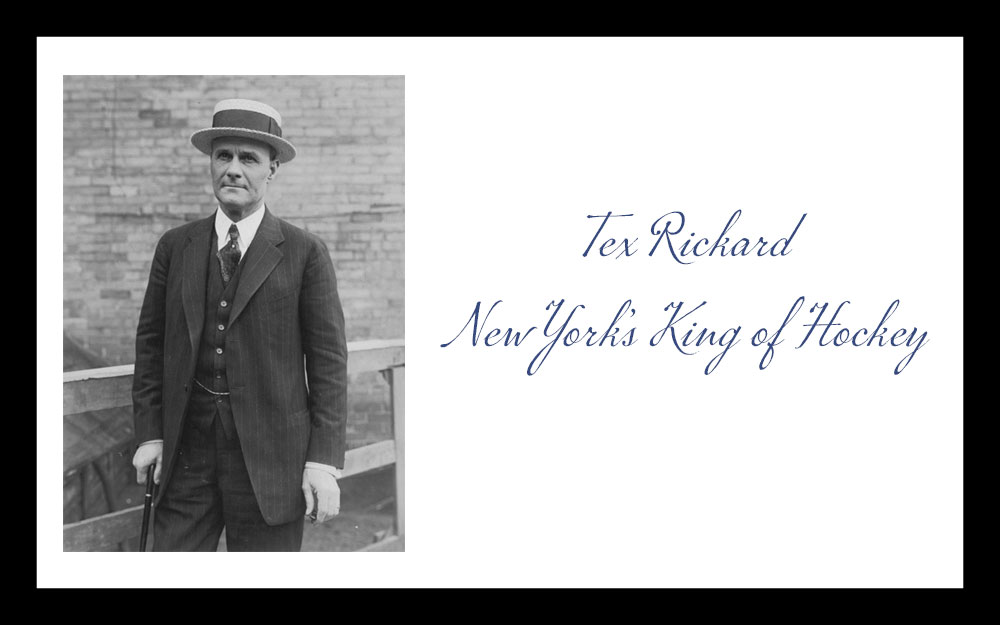 George Lewis “Tex” Rickard (1870-1929) was a towering figure in the sports history of New York. Generous, affable, and honest, Rickard left things better wherever he went, eventually gifting New York with the great hockey dynasty of the New York Rangers.

Rickard grew up in the Texas towns of Sherman and Cambridge, working cattle on his family’s ranch. At the age of twenty-three, he was elected as the city Marshall of Henrietta, the seat of Clay County. He was noted here as being a tolerant and honest lawman – and a superior poker player. Later, he went onto become a famous boxing and sports promoter, working with such boxing greats as Jack Johnson and Jack Dempsey. Rickard was known for his easy-going Texas charm, and Dempsey was reported as having cried at his funeral.

After a well-regarded career in the 1920s in boxing promotion, Rickard went on to help build Madison Square Garden. In 1925, the Garden was the venue of another NHL franchise, the New York Americans, but Rickard, a masterful sports promoter, decided that the Garden needed its own team.

Rickard partnered with hockey greats Conn Smythe and Lester Patrick.  Patrick coached the first season team in 1926 for the New York Rangers. Afterwards, the Rangers finished their first season with the best record in the NHL and the league’s top scorer in player Bill Cook. The hard work paid off when the Rangers won their first Stanley Cup in 1928. No other team has won the Stanley Cup in its two years of existence – this feat remains a singular Rangers accomplishment. The Rangers immediately won a New York following that remains intensely loyal to this day, with its famous “Rangerstown” fan base. 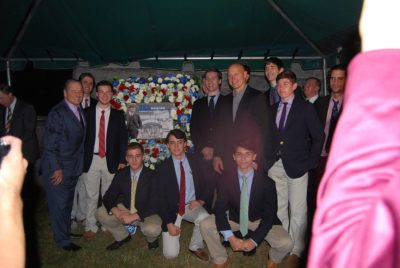 As Rickard built his team, the sports press started referring to the new team as “Tex’s Rangers”, and the name stuck. Known as the “classiest team in hockey”, the Rangers accomplished the feat of making the NHL finals four times in their first 6 years. The Rangers were noted for their unique diagonal lettering across the front of their blue jerseys. According to nhl.com, the Rangers were famed for their “clean, hard play.” The Rangers are noted as missing the playoffs only once in their first sixteen seasons, and only twice did they fall to lower than third place. The names of NHL hall of famers such as Frank Boucher and Murray Murdoch, along with Cook, resound through hockey history as members of that initial squad. 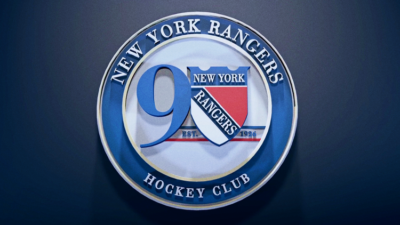 Rickard himself was noted as being warm, generous, kind, and the embodiment of the traits of a Texas gentleman. His boyish smile and impish charm won friends everywhere.

As the 90th anniversary season of the Rangers begins, let’s remember the excitement and the passion that of the hockey dynasty that Tex Rickard built. Come and visit Tex Rickard’s memorial at The Woodlawn Cemetery, and honor the powerful sports legacy that he left us.