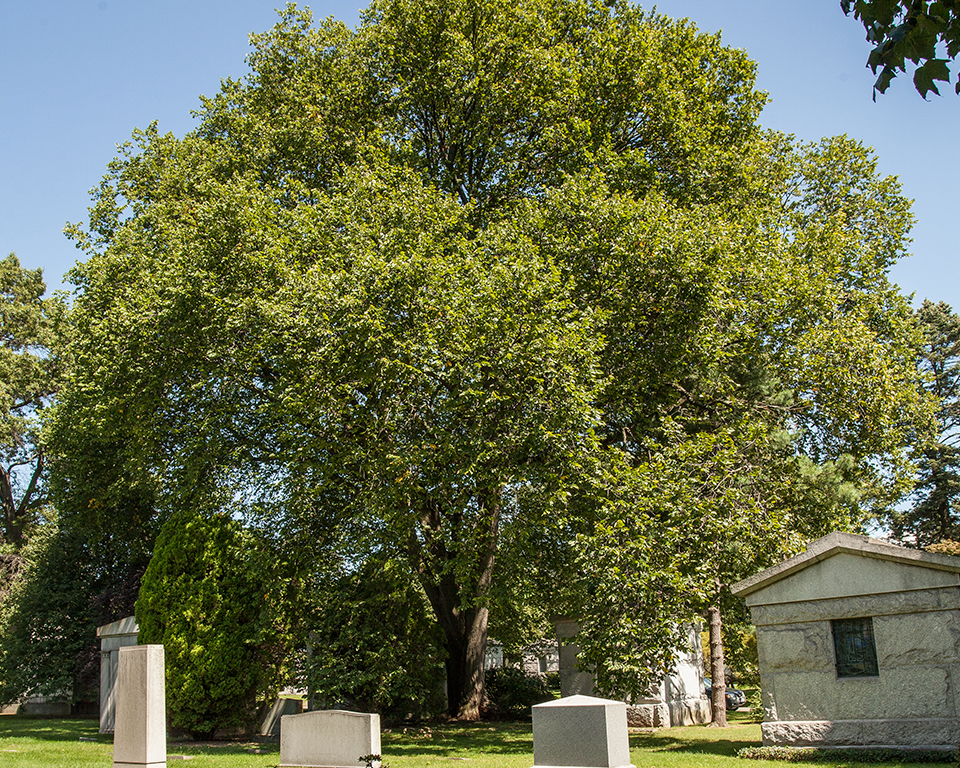 American Elm should be grown in full sun on well-drained, rich soil but it adapts to a wide variety of soils. Tolerant of clay, loam or sand, acid or alkaline soil, it is no wonder this tree was so popular in the early part of the century until Dutch elm disease (DED) began its march across the North America continent. If you plant American Elm, plan on implementing a monitoring program to watch for symptoms of DED. It is vital to the health of existing trees that a program be in place to administer special care to these disease-sensitive trees. Some selections discussed below are reported to be resistant to the DED. In areas such as Texas and Florida where elm populations are less than in northern climates, Dutch elm disease is not likely to be as big a problem as in regions with more elms.

This is the state tree of Massachusetts and North Dakota.

Trees compartmentalize decay well. Although listed as 9B, I have seen trees growing well in zone 10 in Florida near water and occasionally along streets. Elms are susceptible to breakage in storms due to frequent formation of include bark in the crotches of main scaffold limbs. Plants in containers tolerate moderate soil salt solutions up to about 4 mmhos/cm according to the saturated media extract method.

Several cultivars of American Elm, ‘Valley Forge’ (zone 5-8, excellent DED tolerance – may be the most tolerant of the lot), ‘New Harmony’ (zone 4-8, excellent tolerance to DED-second to ‘Valley Forge’, fat vase-more rounded than ‘Valley Forge’), ‘Princeton’ (fast grower, resists elm leaf beetle, third in tolerance of DED close behind ‘New Harmony’), and ‘Washington’ and Delaware #2 (intermediate tolerance to DED), and `American Liberty’ (very susceptible to elm yellows, less DED tolerant than others) are now becoming available. `Independence’ also shows good tolerance to DED but is susceptible to elm yellows disease. ‘Jefferson’, selected by Dr. Jim Sherald, also tolerates the DED and might be tolerant of elm yellows-the parent tree has been on the national mall since 1930. ‘Jefferson’ (probably a cross between American and a European elm) also tends to have U shaped branch unions which break less often than other elms with V shaped unions. The elms listed above have American Elm parentage but no one knows for sure if the mature form will be similar to the classic American Elm. Elm hybrids such as `Cathedral’, `Dynasty’, `Frontier’, `Homestead’, `New Horizon’, `Ohio’, `Pathfinder’, `Pioneer’, `Prospector’, `Regal’, `Sopporo Autumn Gold’, `Thompson’, and `Urban’ are tolerant of DED but none have American Elm parentage. ‘Valley Forge’ seems to be more tolerant of Dutch elm disease than ‘New Harmony’, another outstanding National Arboretum release tolerant of Dutch elm disease. These two are probably the best ones to plant in American landscapes since they have received the most testing. ‘Jefferson’ and ‘Washington’ (American elm parentage) both show promise and have been tested in Washington DC but nowhere else.

Wood weighs about 54 pounds per cubic foot and is very difficult to split due to the crossed grain. Wood is used for the rocker portion of rocking chairs. The wood is considered ring porous which means that there is a large difference in size between the spring wood pores and the summer wood pores. Elms are susceptible to breakage in storms due to frequent formation of included bark in the crotches of main scaffold limbs. Follow the pruning guidelines below carefully and faithfully. Elms are among those susceptible to summer branch drop according to surveys in California. Summer branch drop is a phenomena resulting in failure and breakage of large diameter, live branches typically on calm summer days. All elms reportedly produce allergenic pollen.

Growers have few problems digging this tree in the summer, if needed.