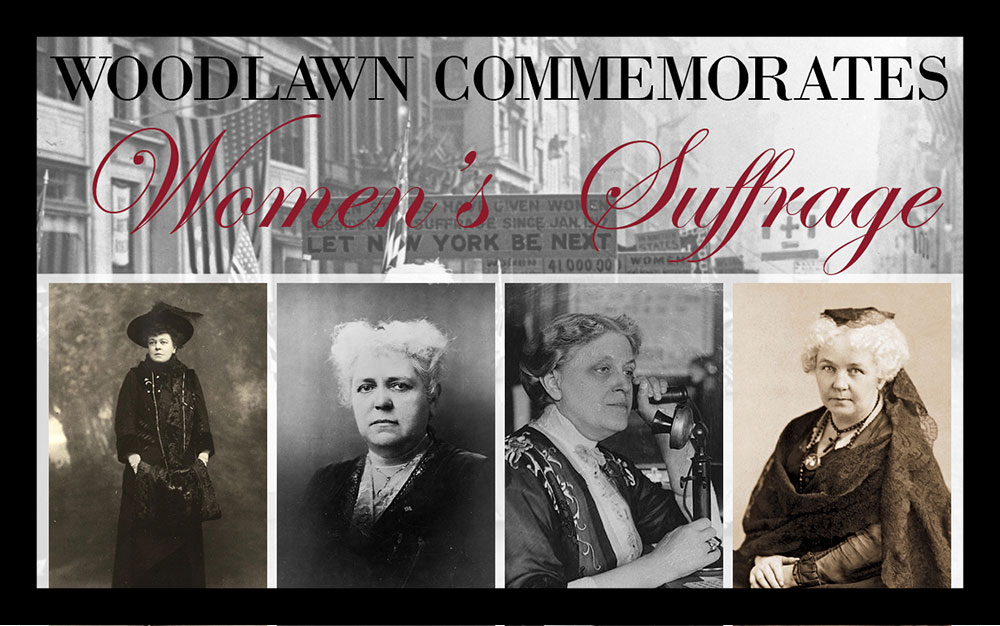 It’s turning out to be a hot political season. Here at the Woodlawn Cemetery, we feel that understanding history is vital to fully participating in our elected government. Many who rest at Woodlawn have been activists and leaders at the forefront of civil rights.Women political leaders from both parties vigorously participated in the recent presidential primaries.Many are also legislators, at all levels of US government. The 19th Amendment was ratified by Congress on August 18th, 1920, and these women worked hard to make suffrage for women a reality. Let us share with you some history concerning women’s suffrage.

…Elizabeth Cady Stanton (1815-1902) was a leader in the abolitionist movement before focusing on women’s rights?

Elizabeth Cady Stanton demanded that African American women be given the same suffrage as men in terms of voting rights, which was a controversial position at the time. Stanton demanded entirely universal suffrage for all people. She worked closely with Sojourner Truth in the struggle against slavery and for women’s rights.

Alva Vanderbilt Belmont’s history could fill books, but she helped the Suffrage movement with her connections, wealth and intense energy, acting as an advocate of women’s suffrage and also the rights of working people. She funded rallies and paid the bail of striking picketers. She helped to found and financially support historically important groups such as the National Woman’s Party, whose activism helped pass the 19th Amendment.

…Mary Garrett Hay (1857-1928) is one of the most important figures in feminist work and the suffrage movement in New York state history?

As President of the New York Equal Suffrage League and the New York City Suffrage league, Hay proved to be an expert hand in political negotiation and worked closely with Carrie Chapman Catt as a lifelong colleague and friend. She hosted, in her home, meetings with important New York state figures and used her network of contacts and friends in both New York State Federation of Women’s clubs and the Christian Temperance Union ,another organization she was a leader in. After the passage of the 19th Amendment, she went on to chair the New York City League of Women Voters.

…Carrie Chapman Catt (1859-1947) founded the League of Women Voters and led the fight to have the 19th Amendment passed in 1920? Working as a dishwasher to put herself through college, Catt was a leader of the National American Woman Suffrage Association, where she mobilized an organization consisting of 1 million members at its peak. Historian Jacqueline Van Voris states in her book Carrie Chapman Catt: A Public Life, that “she led an army of voteless women in 1919 to pressure Congress to pass the constitutional amendment giving them the right to vote.”

All of these women were close collaborators and partners in the work of getting women the right to vote. Their foundational activist work has been honored well after their deaths. Catt became the first inductee into the National Women’s Hall Of Fame, and the Elizabeth Cady Stanton House in Tenafly NJ is a national historic landmark. President Barack Obama named the headquarters that Alva Vanderbilt Belmont had constructed for the National Woman’s party, Sewall-Belmont House, as the Belmont-Paul Women’s Equality National Monument this year in April 2016. Their activist work continues with organizations such as the League Of Women Voters and other organizations that work to enhance voter registration and guarantee ballot access for all Americans, regardless of political affiliation.

Learn more about the women who led the charge to gain passage for the 19th Amendment. Experience history and honor our heroines at the Woodlawn Cemetery.