The Italian Influence at The Woodlawn Cemetery 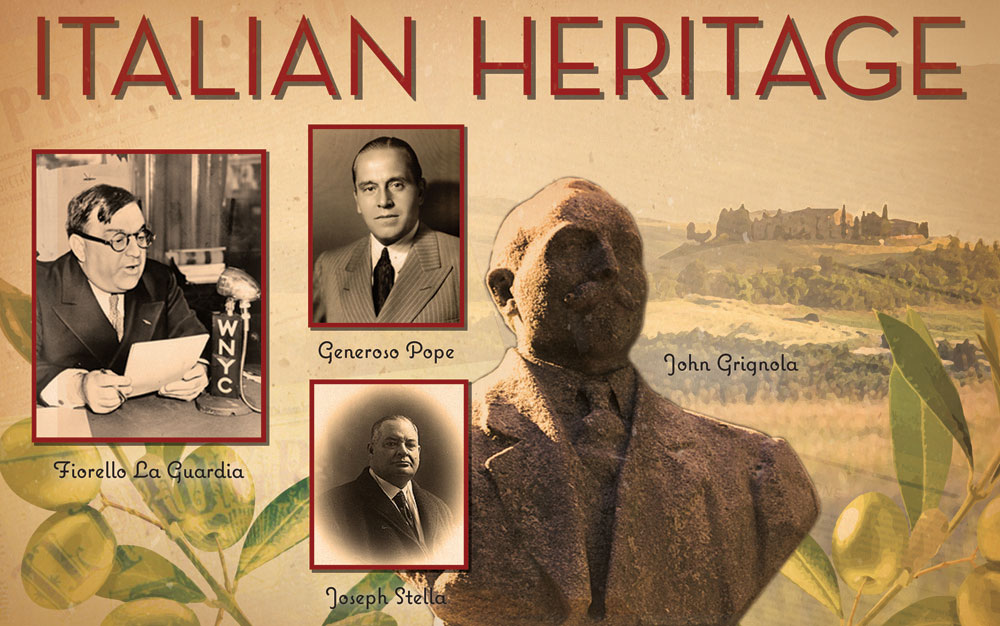 New York’s Woodlawn Cemetery is known for its beautiful sculptures and unique works of art. These delicate figures are symbolic of peace, love, sorrow, and hope, many of which are inspired by classic statues found in Europe. 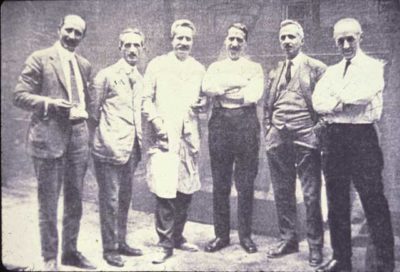 Among the most photographed is the Gerould Memorial, a replica of the famous Monteverde Angel in the cemetery of Staglieno in Genoa, Northern Italy. Carved from marble, many of these romantic images are the work of Italian artists.

Several of Woodlawn Cemetery’s marble statues were imported from Italy. Monument dealers traveled to the port city of Genoa to purchase figures carved from the stone quarried at Carrara, where the mountains are made of pure white marble. Gradually, Italian carvers immigrated to New York City seizing the opportunities to provide statues, architectural details, and other elaborate carvings for a city building mansions, churches, and offices during the “Gilded Age.” 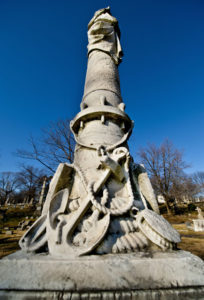 The first company to provide commissioned monuments for Woodlawn’s lot owners was the firm of Casoni and Isola. Gail Borden, the man who made his fortune from canning condensed milk, hired the firm to carve his likeness in a classic toga and set it on a grand pedestal at the entrance to the cemetery.

In 1871, the widow of Admiral Farragut selected Casoni and Isola to create a fitting tribute for the first admiral of the United States Navy. The Farragut Memorial, a National Historic Landmark, is a broken ship’s mast, symbolizing a life cut short. There is an American flag draped over the column. Surrounding the base there is a sword, compass, ropes and tackle, and the State Seal of Tennessee (Farragut’s birthplace).

In 1888, six brothers from Carrara came to New York to work for Adler’s Monument Company. A year after their arrival, the Piccirilli family opened a marble carving studio on the corner of Willis Avenue and 142nd Street in the Bronx. The firm grew to employ over 100 stone carvers and is credited with cutting and finishing such works as the Lincoln Memorial, the friezes of the US Supreme Court building and the lions that guard the New York Public Library. 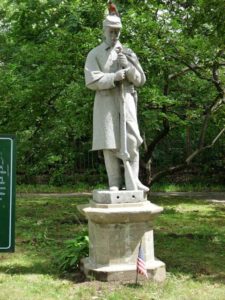 In addition to transforming the clay and plaster works of sculptors into full scale works of art, the Piccirilli’s often created original works. Woodlawn Cemetery has several works by Attilio Piccirilli, including the “Outcast,” the first LaGuardia memorial, and “Fortitude,” which marks their family lot. You can also find works by Piccirilli in the Metropolitan Museum of Art.

One of Woodlawn’s most poignant memorials was carved by John Grignola (1859-1912), who left Italy in 1885. Located in the Elder Plot, the monument tells the story of the loss of a young wife and mother. Grignola’s wife Catharine died at the age of 35, leaving her 8-year-old daughter, Ella, behind. The pink granite monument shows a young girl with her arms wrapped around her mother as she tries to keep her from ascending to the afterlife. A bust of the artist, placed by Ella after her father’s death, is perched on top.

Grignola often worked in granite, producing architectural pieces including the capitals for the Rotunda at the University of Virginia.  One of his best known works, the “Bronx River Soldier,” guards the entrance to the Valentine Varian House, headquarters of the Bronx County Historical Society.

Francois Tonetti was taught to carve by his Italian grandfather. He studied in Paris and eventually moved to New York where he worked as an assistant to the well-known sculptor, Frederick MacMonnies. Tonetti married the artist Mary Lawrence; the couple and their family are buried along the Brookside Cremation Garden.

In 1910, Tonetti and his family picnicked in front of the Belmont Mausoleum while Francois completed the carving of the very detailed limestone relief of St. Hubert and the Hunt. It was common for the stone carvers to finish the works on site. The rough cut would be done in the studio and then the work would be transported to the cemetery ensuring that the fine details would not be damaged when the sculpture was put in place. Tonetti also crafted the Lustgarten memorial on the Golden Rod plot. The artist’s work can be seen in many New York locations including Kykuit, the Rockefeller Estate in Pocantico along the Hudson River.

Some of the Italians setting up shop in New York established businesses outside the cemetery gates. The firm of Setz and Bianchi, makers of the Herman Melville memorial, had their showroom at the corner of East 233rd and Webster Avenue, Bronx, NY. A few doors down, Peter Celi set up shop specializing in the marble angels seen throughout the cemetery. Celi went to the trouble to copyright many of his works; records of his creations can be found at the Library of Congress.

The marble figures are seen throughout the cemeteries and the city became so popular that Diamond Studios was established in neighboring Mt. Vernon, NY. The company employed many carvers from Italy, produced catalogs to make it easy for those who wanted romantic and religious figures for memorials to select a design. In addition to establishing a cultural community of Italian artists surrounding the cemetery, the contributions of these talented sculptors provided Woodlawn with the “largest and finest collection of funerary art in the nation.”

We hope you find the history and information in this blog as interesting as we do. If you have questions about end-of-life planning or burial or cremation options here at Woodlawn, reach us anytime at (718) 920-0500 or through our website.