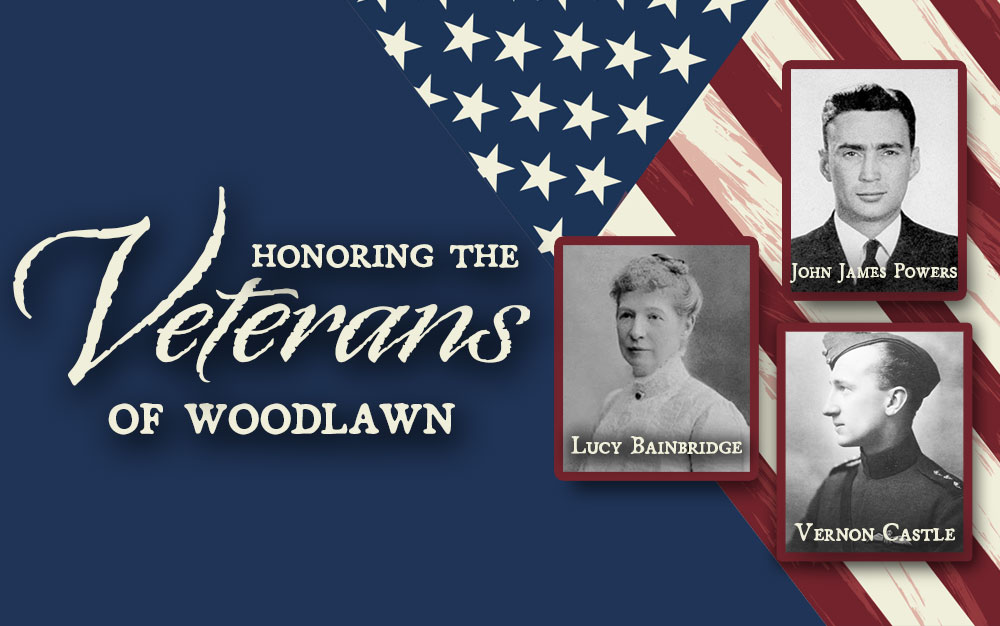 Monuments That Commemorate Their Service

Thousands of Veterans are memorialized at The Woodlawn Cemetery, many with traditional military markers, others decorated with symbols that illustrate pride of service, love of country, and willingness to make the supreme sacrifice for the cause of freedom.  There are over 6,500 men and women who served in the armed forces in Woodlawn’s care.  Monuments on our grounds honor the service of a Revolutionary War Captain, eleven Medal of Honor recipients, the nation’s first Admiral, and those who lost their lives in Middle Eastern conflicts.

After the American Civil War, when there was a need to mark the thousands of graves, Secretary of War William Belknap authorized the use of marble memorials issued by the government, replacing the wooden markers that had been used to honor the dead.  These first government markers have raised letters, traditionally set in the center of a shield.  They commemorate those who served in the Civil War and the Spanish American War and can be found in the north end of Woodlawn. 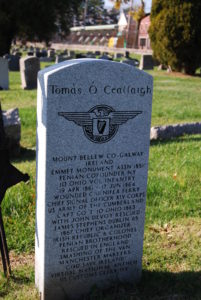 After World War I, when the remains of thousands of soldiers were shipped home, a new style marker was adopted by the government.  These white marble markers have a rounded top and include the name of the soldier, rank, regiment, division, date of death and home state.  As rules changed in private garden cemeteries to accommodate the war dead, the government began to issue flat markers that could serve as footstones or headstones.  Initially made of marble, today these tributes are also issued in granite and bronze.    Many of the white upright markers are in the southern part of the cemetery, the flat markers are located throughout our grounds, many marking the graves of World War II Veterans in Zinnia, Wild Rose, Fir, and Alpine Hill Plots. 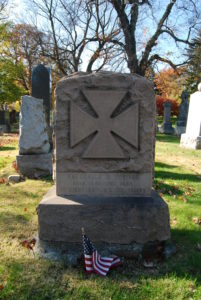 It was in 1922 when families began incorporating religious emblems on military gravestones.  Initially, two symbols were used: the Latin Cross to represent the Christian faith and the Star of David to indicate the Jewish faith.  Today there are over two dozen symbols inscribed on headstones to acknowledge the diversity of spiritual beliefs held by the men and women who serve the country.  As a non-sectarian cemetery, Woodlawn has always welcomed those of any faith.

Among the custom-designed memorials found at Woodlawn created to commemorate service is the flag draped monument for General Franz Sigel, a German immigrant who served in the Union Army and took great pride in his citizenship.  Henry Edwin Tremain, awarded the Congressional Medal of Honor for heroism at the battle of Resaca, has a memorial inscribed with a Roman warrior’s sword.  The doors on the mausoleum for Julius Langbein are decorated with both the Medal of Honor and the symbol of the Grand Army of the Republic.

Two young Bronxites who lost their lives when their plane was shot down in 1944 are remembered with portrait busts that show them in uniform as they headed off to war.  Some Woodlawn families have placed cenotaphs (memorials to those who are buried elsewhere) to remember those who rest in cemeteries in Europe, the Pacific, and other parts of the country.  Many of the memorials indicate the location and battle where the soldier lost his life.

Some of the inscriptions show the pride that goes with notoriety.  Monuments acknowledge association with the “Rough Riders” from the Spanish American War, the “U.S. Colored Troops” who broke racial barriers during the Civil War, and recipients of the Croix de Guerre, flyers acknowledged for their bravery by the French government. 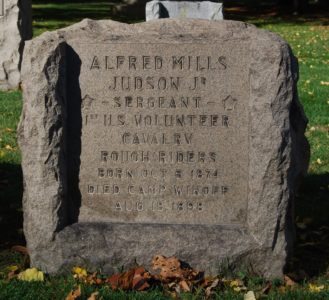 Today our Lot Owners commemorate those who served with photographs on porcelain cameos, bronze emblems placed in community mausoleums, and stones that are etched with symbols of service.  Every May, our growing corps of volunteers place flags on the graves of those who joined the Army, Navy, Air Force, Marines, and Coast Guard.  When you visit a Veteran at Woodlawn, please tell our staff to ensure they are included on our Veterans roster.  At Woodlawn, we make a special effort to remember those who served our nation, to record their stories, and to document the memorials to the brave men and women dedicated to American ideals.