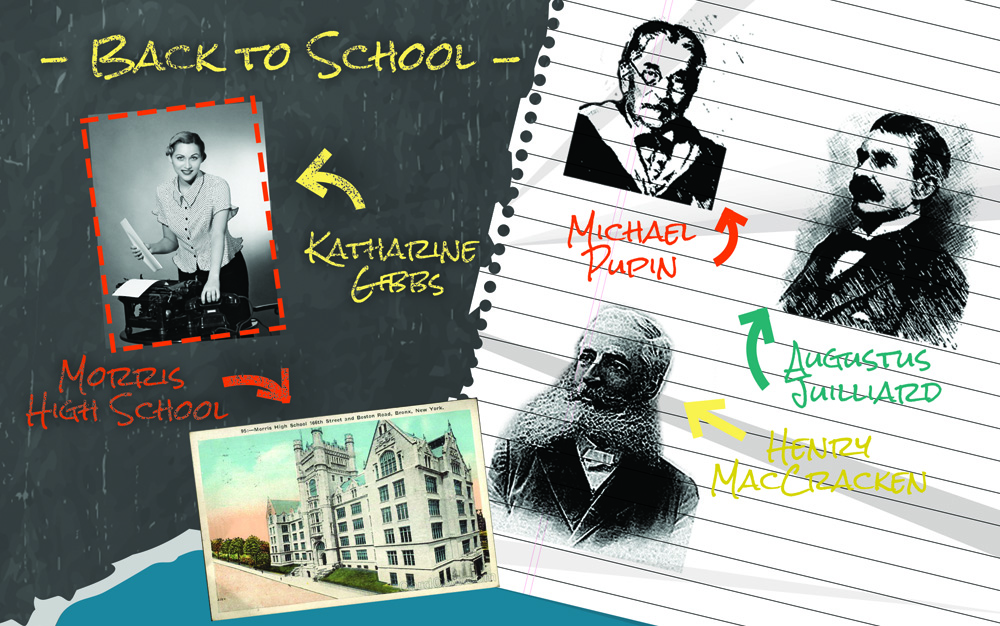 Summer is coming to a close and as we get ready to head back to school, let’s take some time to remember those who dedicated their lives to teaching and established the institutions where we go to learn. Some of the most impressive schools in New York City were designed by architect Charles B.J. Snyder (1860-1945). Snyder saw schools as Civic Monuments, creating several buildings that are now landmarks. The list of impressive schools Snyder designed include: Morris High, Erasmus Hall High School, and DeWitt Clinton High which is now part of the John Jay School of Justice.

Bronx Community College was originally part of New York University. The grand library and Hall of Fame of Great Americans was the vision of Henry Mitchell MacCracken (1840-1918) who served as the Chancellor of New York University. His sons also became educators, serving as the Presidents of Vassar and Lafayette Colleges. The MacCracken memorial was recently cleaned by our Preservation Training Program (PTP) Apprentices. The PTP crew also restored the Lakeside mausoleum of the one-time President of the New York Board of Education, James McLean (1819-1890).

Augustus Juilliard, whose generosity established the school of music, is among many Woodlawn philanthropists who made substantial donations to institutions of higher learning. In his will, newspaper publisher Joseph Pulitzer (1847-1911) left two million dollars to found the Columbia School of Journalism. The Mannes School of Music, part of the New School, honors violinist and educator David Mannes (1866-1959) the husband of Clara Damrosch. Mannes is memorialized with the family of legendary conductor Leopold Damrosch.

Innovative educator Winifred Sackville Stoner (1870-1931) who believed in “Natural Education” thought learning should be fun and exciting. Her memorial is not too far from Maria Kraus Boelte (1836-1918), considered a pioneer in the promotion of kindergarten and pre-school education. Katharine Gibbs (1863-1934) bought the Providence School for Secretaries for $100 and expanded the institution to become a successful chain of schools that trained young women to enter the workforce.

Every September, old timers will sing the classic “School Days,” written by Gus Edwards (1879-1945) in 1907. In addition to being a song writer, Edwards was a talent scout, credited with discovering comedian Groucho Marx and Ray Bolger, the scarecrow from the Wizard of Oz. The Edwards memorial is a bench that features two children as they head off to school carrying their books. Sculptor Charles Keck, responsible for New York’s Father Duffy Memorial and the carvings on the Bronx County Courthouse, created the images that remind us of the end of summer.