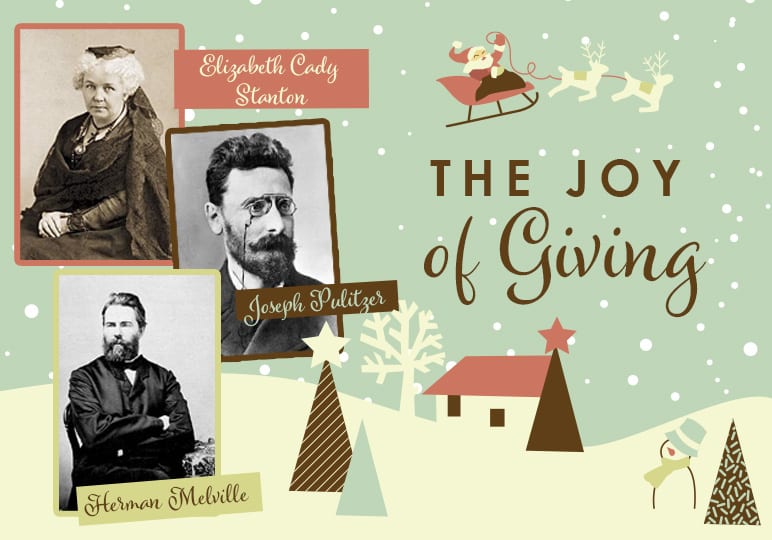 Many of Woodlawn families celebrated the holidays by giving to the community, helping the needy and surprising the people of the city by presenting spontaneous gifts. They shared their thoughts of the season, gave back to the places that provided opportunities and made headlines with their generous deeds.

Every year on Christmas Eve, newspaper publisher Joseph Pulitzer gave turkeys to all of his employees. In 1888, 285 of the “finest turkeys that could be found” were laid out on ten tables for the employees of the St. Louis Post-Dispatch. The centerpiece of the holiday meal were distributed to artists, writers, clerks and carriers. In 1895, the Louisville Courier Journal published a feature story on Elizabeth Cady Stanton’s thoughts on Christmas. The leader of the Women’s Rights Movement said: There was a heroic simplicity about the way in which the old-time housewife prepared for Christmas. It was not so much that she must give and receive gifts, listen to and create flatteries, dance and sing the hours away, as it was that for the space of one whole day everybody belonging to her was content. The Christmas of the past was full of associations. The Christmas of the present is full of expectations.

Matthew C.D. Borden, known as the “Calico King,” surprised the employees of his Iron Works Mills by distributing $12,000 to his employees on December 24, 1901. As was his tradition, none of the workers knew of the bonus in advance. A notice was posted at the mill, informing all the men, women and children that worked there they would be receiving a seasonal bonus equivalent to 10% of their wages.

Real Estate investor Robert Goelet was reported to be a New York City Santa Claus, when his big automobile stopped on Fifth Avenue during the holidays in 1914. Wrapped in fur, the generous man pulled a five dollar gold piece from a bag full of coins and handed it to a Traffic Policeman. Goelet tried to keep his identity a secret, but the officer managed to write down his license plate to reveal the name of the jolly elf to the press.

Philharmonic Conductor Josef Stransky gave a concert for 3500 soldiers preparing for war during the holiday season in 1917. His account of the performance read as follows: Throughout the performance the silence was so electric that the sudden applause that followed each number came with the emotional effect of a thundered crash from a cloudless sky. The maestro went on to say: The response of those men in a day of terrific toll makes it clear beyond a doubt to me that art-music-can do something to help. In 1923, a New York Times article Books for Christmas Trees and Christmas Stockings recommended the special gift edition of Typee, a novel about adventures in the South Pacific by Herman Melville. The new edition featured colored illustrations and was a companion to the special edition of Moby Dick, issued in time for the holidays in 1922.

Known as the “Breadline Poet,” wealthy investor Robert Clairmont lost an $800,000 portfolio in the stock market crash of 1929. A few years before, Clairmont had made arrangements for WC Handy to have a concert at Carnegie Hall giving the “Father of the Blues,” the opportunity to be heard in a concert hall when he came to New York. Hearing of Clairmont’s misfortune, the brilliant composer brought the writer to his home on Christmas Eve in 1930 to celebrate the holiday.

Barbara Hutton, an heir to the Woolworth Department Store fortune, responded to a letter written by newspaper columnist Ed Sullivan who asked her to provide an annual Princess Barbara Christmas dinner for the needy families of New York during the Great Depression. She was brought to tears and promptly wrote the future television host a check for $5,000. In his thank you column Sullivan wrote: Your check means a merrier Christmas to the 10,000 poor who didn’t believe in Santa Claus. In the wake of the Great Depression, New Yorkers established the “Neediest Cases Fund” to help those who were out of work and in need of housing and meals. In 1937, Jeremiah Milbank made a heartfelt plea to potential donors: Christmas would not seem like Christmas if there were not this opportunity given us to bring needed help in all these deserving cases. Philip Lehman and John and Fannie Hertz were among the Woodlawn Lot Owners who contributed annually to this holiday fund. It was late in December of 1956 when the newspapers announced that the New York Yankees were getting a wonderful Christmas present because Dan Topping, the President of the ball club, signed Yogi Berra and Whitey Ford! In 1963, Newsday reported that Parks Commissioner Robert Moses had “traded in his boxing gloves for a red suit and white whiskers. Just in time for the holiday season, the “Powerbroker” announced that he had reached a compromise with “assorted Santa Clauses” and would be reducing the rates for New York City school children to go to the World’s Fair.